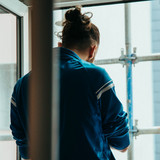 Mr. Käfer is a Cologne-based beatmaker and producer. While there is no mistaking the early influence of the jazz greats and 90’s hip hop, Mr. Käfer has a dynamic sound that continues to develop. His music is nostalgic but understated, with deep introspective vibes. Originally from Austria, Mr. Käfer draws creative inspiration from nature and from his travels in the world as well as other artists in the scene. He studied Audio Design in Salzburg and has released on Postpartum Records, Chillhop Music, Melting Pot Music and others. Contact: mr.kaefer@gmx.at