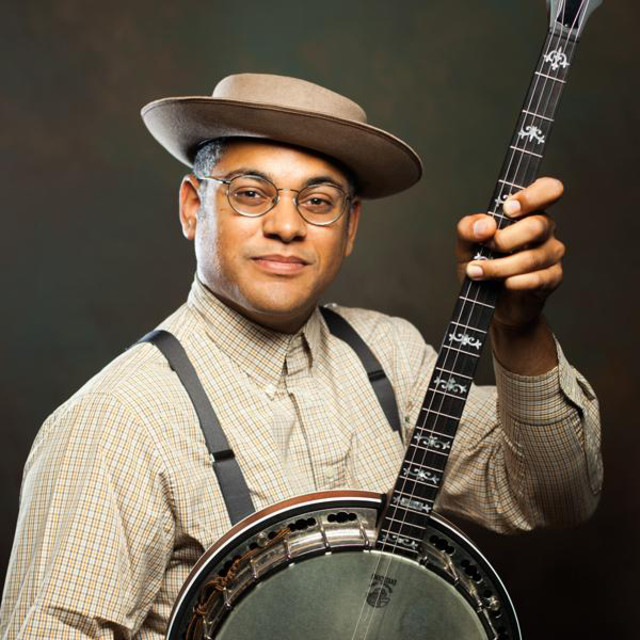 GRAMMY Award Winner, Two-Time EMMY Nominee, Dom Flemons is known as The American Songster since his repertoire covers over 100 years of American popular music. He’s a music scholar, historian, record collector and multi-instrumentalist. In 2018, Flemons released his critically acclaimed solo album Dom Flemons Presents Black Cowboys on Smithsonian Folkways in conjunction with the National Museum of African American History and Culture. The album was nominated for a Grammy Award for Best Folk Album and peaked at number #4 on the Billboard Bluegrass Charts. He won a Wammie Award for Best Folk Album and received nominations for Best Acoustic Album at the Blues Music Awards and Best Folk Album at the Liberia Awards. Flemons had his solo debut on the Grand Ole Opry and was chosen to be a Spotlight Artist at the Soundtrack of America event curated by music icon Quincy Jones and EMMY Award Winning Director Steve McQueen. The Country Music Hall of Fame selected Flemons and his album to be featured in the American Currents Best of 2018 exhibit. In 2005, Flemons co-founded the Carolina Chocolate Drops who won a GRAMMY for Best Traditional Folk Album. He left the group to pursue his solo career in 2014. In 2016 they were inducted into the North Carolina Music Hall of Fame. He currently serves on the Board of Directors for Folk Alliance International, Music Maker Relief Foundation and is Governor on the Board of Directors of the Washington, D.C Chapter of The Recording Academy.