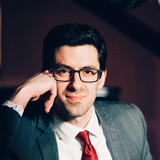 British pianist, composer and bandleader, Gabriel Latchin has made a name for himself as one of the UK’s finest musicians, praised by critics and world renowned musicians alike. Known for his effortlessly swinging feel, deep repertoire and compelling performances, Jazzwise recently described his playing as “impeccable... the clarity of his lines evoking something of Hank Jones or Tommy Flanagan”. 2020 sees the release of "I’ll Be Home for Christmas", his third album as a leader. The collection of songs features new arrangements of beloved classics, including “White Christmas”, “Silent Night” and “Have Yourself a Merry Little Christmas”. This builds on the success of Latchin’s 2019 album "The Moon and I" - over 9 million streams so far - which was met with critical acclaim worldwide: “this is a masterpiece that shows the true skill of his composition” - Jazz Japan. Recognised as a talented composer and arranger, Latchin’s writing is fresh and original, whilst reflecting his serious study of the jazz piano tradition. On "I’ll Be Home for Christmas" Latchin presents well-known songs through the eyes of his musical idols. For example, how might Bill Evans approach a Christmas song? What would Ahmad Jamal do with “Rudolph the Red-Nosed Reindeer”? An in-demand sideman, Latchin was personally invited by Christian McBride to perform with himself and Renée Fleming at Wigmore Hall in London. "Gabriel is an excellent musician and one hell of a nice guy" - Christian McBride.