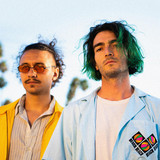 The world may seem like a pretty strange place right now, but if nothing else that’s forced us into realizing that being human is a shared experience. That sentiment lies at the core of Earth Is A Black Hole, the second full-length from the Los Angeles rock act Teenage Wrist. The album also marks the group's first release since the departure of former bassist/vocalist Kamtin Mohager last year and sees the duo of guitarist Marshall Gallagher stepping up as frontman, with longtime drummer Anthony Salazar backing him up in spectacular fashion. The artistic liberation of this lineup change allowed Teenage Wrist to expand on the shoegazing sound that helped establish them as one of the most exciting rock bands around today. Earth Is A Black Hole sees the band shifting their songwriting focus to a more modern sound that showcases the limitless potential of the band. “Everything will eventually disappear into nothing and that can make you feel small and insignificant. But that same fact should be motivation to tell the people who are important to you that you love them and savor these beautiful moments in your life because they’re never coming back. All we have is this moment and that’s the most important thing: To be present and be positive and transcend the black hole bullshit because it’s all going to end one day.” That dichotomy between hope and hopelessness is what lies at the core of this album—and it’s part of what makes Earth Is A Black Hole such a satisfying listen.