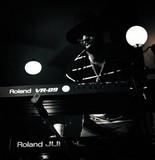 Bursting out of the musically-fertile D.C. area, naturally-gifted, multi-talented writer/musician/producer BEE BOISSEAU (last name pronounced “boy-so”) knows of this phenomenon all too well. Born & raised on the south-side of Richmond, Virginia, BEE was amongst the first generation of kids actually raised on hip-hop.

Though it may have initially been hip-hop & later jazz that opened his eyes to the possibilities of being involved in music-making, his first actual introductions to music were in the church & at the family piano. His passion and fixation on music & performance followed him to college, during which time he was focused on his keyboard playing. BEE later found himself propositioned with the opportunity to do some shows in Denver, Colorado, where he not only gigged regularly but stayed to live for nearly ten years playing with the likes of Nick Colionne, Gerald Albright, & Jackiem Joyner. Soon thereafter, a gig with Eric Roberson resulted in him making the acquaintance of actor/emcee Wes Felton (one half of the socio-conscious hip-hop/R&B duo The CrossRhodes alongside Raheem DeVaughn). Connecting with The CrossRhodes lessened the fabled “six degrees of separation” between BEE BOISSEAU & Grammy-winning R&B star Raheem DeVaughn. “It’s his passion for the culture & for the music,” says Raheem of his decision to sign BEE to his DMG imprint.