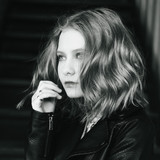 My Journey: I've been working on a career in the performing arts since I was little and I will not rest until I've "made it". Starting with dancing, I continued with acting but realized that my deepest passion is music. My days are spent with music-making and singing. Lyrics just come to me; there is no struggle in finding the right words or themes, and once I have the lyrics down, I sit at the piano and work on the melody. A lot of work goes into the producing and I spent hours in the studio to get things right. I'm a perfectionist. My Music I mostly write ballads and I like to choose. topics that are rather unusual (Achiever), deep (Leave the Armor), or even dark (Burn the House Down Slow). My songs are about healing from emotional pain, the inequality of gender, the fear of growing up, lost lovers torn apart in the LGBTQ+ community, the sorrow of a nightingale as it watches the winter leave, and so much more. Acting I am a singer/songwriter but also an actress who won two "Best Actress" awards.

Mostly known for my role as Anna in Call of Duty WWII and my lead role in "The Chocolate Soldier" as well as other roles in several other productions. As an actress, I learned to connect to emotions and understand the motives of people. Often I needed to ask the question "What is it that the character REALLY wants?" to understand and play a character in a specific scene. This helps me with songwriting and performing on stage.