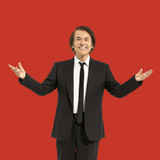 Spanish pop star Rafael Martos (born Miguel Rafael Martos Sánchez and globally as "Raphael") is one of Spain's best-known singers. His multi-octave range and flamboyant stage persona have entertained and engaged people worldwide since 1959. He is also a movie and television actor, and the father of Spanish movie director Jacobo Martos. Raphael is perhaps known best in his homeland for dramatically acting out his songs while on-stage. His record company, Hispavox, awarded him with the world's one and only "Uranium Disc" for his compilation album Ayer, Hoy y Siempre due to the impossibility of presenting him with more than 350 gold and 50 platinum discs -- it sold 50 million copies. Born in 1943, Raphael took first place at a children's festival at the age of nine, best among contestants from all over Europe. In 1966, he represented Spain at the Eurovision festival with his song "Yo Soy Aquel" and one more time the following year with "Hablemos del Amor." By that time, the artist's popularity was reaching America, allowing him to perform at New York's Madison Square Garden. Raphael's acting career started in 1962, when he played a role in the movie Te Voy a Contar Mi Vida, directed by Antonio de Amo. He later starred in the 1966 movie Cuando Tú No Estás. One of his major achievements has been learning different languages to reach as many people as possible, singing and recording in English, French, Italian, and even Japanese, and performing at the most important venues around the world such as New York's Carnegie Hall, Paris' Olympia, Moscow's Bolshoi, and Sydney's Opera House. He released the "uranium"-certified Ayer, Hoy y Siempre in 1982 -- the 50-million-selling double-length career overview contained virtually all of his hit singles and popular album cuts. Raphael was the biggest artist in Spain. He regularly sold out every venue he played, and his catalog of recordings had already, up to that point, moved nearly a hundred million units.

Raphael celebrated his 25th career anniversary in 1987, making history for being able to reunite 114,000 fans at Santiago Bernabéu Stadium. In 1998, the artist published his biography in a 569-page book called ¿Y Mañana Qué? In 2000, Raphael took part in the Spanish version of the stage musical Jekyll & Hyde for seven months, with great success. Three years later, he suffered a major health setback when he contracted hepatitis B. After requiring a liver transplant, he recovered successfully and has been an active organ donation promoter ever since. Raphael spent the most of the 2000s recording for Sony, including his 2012 chart hit El Reencuentro, followed by a world tour and the live offering El Reencuentro: En Directo Teatro de la Zarzuela in 2013. He moved over to Universal for 2014's De Amor & Desamor, the following year's Sinphónico (offering orchestral versions of his hits), and the holiday set Ven a Mi Casa Esta Navidad. That same year, he made his first cinema appearance in nearly four decades, in the hit film Mi Gran Noche directed by Álex de la Iglesia. Raphael won a Goya Award for best actor at that year's Latin Beat Film Festival. In 2016, Raphael released the studio offering Infinitos Bailes, whose tracks were composed by a who's who of Spanish songwriters including Enrique Bunbury, Dani Martín, Galician Iván Ferreiro, and Pablo López, among others. In 2017, the Rama Lama label issued the first two entries in its chronological overview of the singer's career: Vol. 1: Sus Tres Primeros Álbumes Con Hispavox (1965-1967) and Vol. 2: Sus Primeras Grabaciones en Discos Philips y Barclay (1962-1963). A year later, Raphael issued Resinphónico, which featured sometimes radical reworkings of songs popular and obscure thanks to symphonic orchestrations, electronics, arrangements, and production by Lucal Vidal. The release was followed by a two-year world tour. In November 2020, the artist issued 6.0, another kind of retrospective. It featured Raphael's hits re-recorded as duets with a host of star performers, including Manuel Carrasco, Luis Fonsi, Gloria Trevi, Alejandro Fernández, Mon Laferte, Omara Portuondo, Pablo Alborán, Mikel Izal, and Luciano Pereyra. Further, it included two unissued songs co-composed and performed with Pablo López and Natalia Lafourcade, and the new solo single "Resistre." ~ Drago Bonacich & Thom Jurek