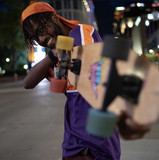 Jeffrey Rucker (born October 27th, 2001), also known by his stage name Chaos1.0 or "Kayo", is an American actor and musical artist from Dayton, Ohio. Aside from his studies in the performing arts, Kayo has been crafting his sound since he was fifteen years old. With various inspirations such as Saba, Bill Withers, Childish Gambino, and many more, Chaos1.0 strives to create intricately captivating yet truthfully grounded works of music. While focusing on more of a mellow style of alternative hip-hop, Kayo isn’t afraid to exercise his versatile skills through dedicated energy and clever lyricism.