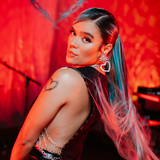 Colombia's Karol G is a best-selling, chart-topping, award-winning vocalist known for her soulful mix of reggaeton, pop, and dance-oriented R&B. Her collaborative appearances on singles with urbano stars including Nicky Jam, her partner Anuel AA, Bad Bunny, J Balvin, Maluma, and Pitbull, regularly placed inside the Top 100 and their accompanying videos garnered hundreds of millions of views. Though she issued her first single at 16 in 2007, she struggled for the next decade establishing herself in reggaeton because it was a male-dominated genre. It took ten years, more than a billion YouTube views, and hundreds of millions of music streams before she could release her debut LP, Unstoppable, in 2017. Two years later, her profile rose to the level of a bona fide star thanks to chart-topping singles such as "Tusa" with Nicki Minaj, "China" with Anuel AA, Daddy Yankee, Ozuna, and J Balvin, and "Ocean," the title track from her number 22 sophomore long-player. Born Carolina Giraldo Rivera in Medellin, Colombia in 1991, Karol G was interested in music from a young age, influenced by her father, a working musician. After high school, she studied music at University of Antioquia. Her first break came in 2010 when she competed on Colombia's version of The X Factor, El Factor X. Two years later, her profile was raised even higher after dueting with Colombian reggaeton singer Reykon on the single "301." In 2013, Karol G released her first solo single, "Amor de Dos," featuring Nicky Jam. Several more well-received singles followed including "Ricos Besos," "Manyana," and "Ya No Te Creo." In 2016, she delivered the Daniel Echavarria-produced single "Casi Nada." The following year, "Ahora Me Llama," a collaborative single with Bad Bunny, became a hit. It was featured on her debut full-length, Unstoppable, which was released in October 2017, and peaked at number two on the Billboard Top Latin Albums chart. She returned in early 2018 with the saucy single "Mi Cama." Another single, "Punto G," followed in 2019 and took home the year's award for Best Song at the Premio ASCAP ceremony and was nominated for three Billboard Latin Music Awards. On April 1, 2020, Karol G and Anuel AA released the collaborative single and video "Follow." The video rang up 20 million views in its first four days. Another song, "Ay, Dios Mío!," arrived in July 2020 and hit number five on the Billboard Hot Latin Songs chart. ~ Matt Collar, Rovi