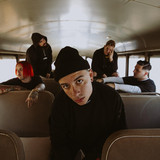 SYLAR is a celebration of self-expression, against a backdrop of down-tuned bounce, stadium ready choruses, and streetwise hip-hop flavor. The Queens, New York sonic stomp squad are positioned as a new voice for the voiceless, unapologetically championing the underdog, reigniting the rap/rock genre, and doing it all with style. Seasons, the band’s third full-length, isn’t just an album. It’s a manifesto. In “All Or Nothing,” frontman Jayden Panesso affirms SYLAR’s dedicated solidarity with the downtrodden and outcast. “For the ones who can’t speak / for the ones who are too scared to dream,” he declares. It’s a mission statement, a post nü-metal call to arms. “They take the Linkin Park template and update it for 21st century New York,” wrote tastemaker publication Kerrang!. “SYLAR’s slick delivery points to big things ahead.” SYLAR crackles with unrestrained urgency and incessant energy. Guitarists Miguel Cardona (who also provides vocals) and Dustin Jennings, bassist Travis Hufton, drummer Cody Ash, and Panesso are musical disciples of genre-defining bands, adding a fresh spin for a new generation of adherents. They’ve taken the melodic might of Linkin Park, the swagger of Limp Bizkit, the atmosphere of Deftones, the straightforward bounce of P.O.D. and the heaviness of Marilyn Manson, and forged something uniquely their own, blazing a new path of individuality within metalcore.