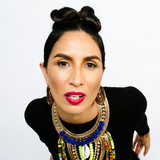 Born in Mexico but raised in Australia, Maya Jupiter was exposed to hip-hop when American rappers became a fixture on Australian radio in the '90s. After impressing her high-school friends with her ability to sing along with those songs on the radio, she penned her first original rhyme at the age of 14. Four years later she was attending the same club every weekend, trying to talk the promoter into letting her on-stage. In 2001 she won the Big Day Out MC Battle. In 2003 her debut album, Today, was released on Mother Tongues, an independent label dedicated to women in Hip Hop. That year she joined Channel [V] as the host of their Soul Kitchen program and also joined the latin-jazz-hiphop band Son Veneno, though she remained behind when they relocated to England. A year later, Jupiter, who had previously hosted Alchemy on SBS radio, became the host of the weekly hip-hop show on Triple J, a national radio station largely responsible for helping Australian hip-hop coalesce into a unified scene. Along with DJ Nick Toth and MC Trey, she formed a group called Foreign Heights, releasing an album of the same name in 2007. After moving to Los Angeles in 2008 she released two albums produced by Grammy Award Winning Quetzal Flores and co-founded Artivist Entertainment. She was the Monday host of KPFK’s Global Village 2017-2019 Currently Maya continues to mix Hip Hop with Son Jarocho, Rock and Soul creating music about social justice and change while raising two young children.