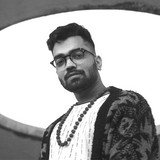 When a guy from central India begins to see colors in audio, some ferocious inventions become inevitable. Arjun Nair bends every musical convention to his will, be it through his explosive sound design, unparalleled style, wild resilience or mind-bending creativity. People like him either find a way or make one. It's pretty easy to describe his music, Imagine an artificial intelligence engineer that popped Adderall and started producing electronic music in the Alps. His pure architectural approach and an intense go-getter mindset make him a lethal force to be reckoned with. Arjun's art is not only a result of his abstract emotions and mechanized visions but also his savant-like planning, tactical execution and borderline demented work ethic. This sonic scientist is bound to create some extraordinary movements on the planet, or he might just dent the entire bass music scene for the fun of it. It's reasonable if you're ready for both.