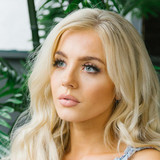 Samantha Harvey is a singer, songwriter and one of the UK's top social media stars. She has amassed an organic and loyal following of over 2 million subscribers by posting cover versions of popular songs on her YouTube channel. With over 225 million views to date on her channel and 2 million followers on Facebook, she boldly decided to independently release her first original track, ‘Forgive Forget’ which shot into the charts completely organically. Samantha has supported acts such as Nick Jonas, Craig David and Rita Ora. All of this experience culminated in her own UK headline tour at the end of 2018, concluding with shows selling out in less than 24 hours. Now, Samantha has returned with her hotly anticipated new single 'Get To Know You'.