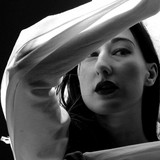 Nika Roza Danilova has been recording and performing as Zola Jesus for more than a decade. As a classically trained opera singer with a penchant for noisy, avant-garde sounds, she launched her career with a series of lo-fi releases that pitted her soaring vocals against harsh industrial clatter and jittery synths. The signature Zola Jesus sound became more hi-fi as she began to explore her own skewed vision of pop music on releases like Stridulum, Valusia, and Conatus. With the release of Conatus, Danilova was propelled to regular appearances on festival stages all around the world, as well as a special performance at the Solomon R. Guggenheim Museum in New York. That era culminated in the release of Versions, a collection of string quartet interpretations of her most beloved work, conducted by J.G. Thirlwell (Foetus). That album and subsequent tour were followed by her most hi-fi outing to date, Taiga. Now, coinciding with her return to both the Wisconsin woods in which she was raised and her longtime label, Sacred Bones Records, Zola Jesus has produced Okovi, her darkest album yet. It is, in Danilova’s words, “a deeply personal snapshot of loss, reconciliation, and a sympathy for the chains that keep us all grounded to the unforgiving laws of feral nature.”