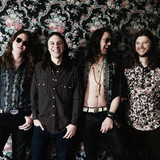 Bishop Gunn of Natchez, Mississippi, is rooted in the history and sounds of their home and the surrounding Delta, and features a blend of rock and roll, soul and blues. The group consists of vocalist Travis McCready, Drew Smithers on guitar, Ben Lewis on bass and Burne Sharp on drums. Bishop Gunn released their debut full-length album Natchez in May 2018. They worked on the release with Grammy Award-winning producers Casey Wasner and Mark Neill at legendary Muscle Shoals Sound Studio and FAME Studios, as well as The Purple House in Leiper’s Fork, Tennessee. The album entered the Billboard charts as the #4 Blues Album and also appeared as #8 on their Heatseekers South Central chart. Rolling Stone Country featured the band among their “Artists You Need to Know,” asserting “anyone can cite the Muscle Shoals sound as an influence, but few acts can actually pull off making music worthy of such a claim. Nashville band Bishop Gunn is one of those acts…The resulting music is the perfect blend of Nashville and the Shoals, and is the rare album that builds upon its influences rather than resorting to outright mimicry.” The band is looking forward to touring in support of the album this summer, including performances at The Peach Fest, The Big House Museum, support dates for Lynyrd Skynyrd and The Outlaws and many others.