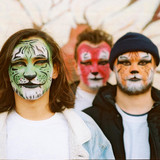 Coming out of south Birmingham, UK, Bad Girlfriend hit the road running in 2015 and instantly made a name for themselves on the local live circuit for their off the wall, amp climbing, stage diving live show and balls to the wall punk/garage sound. Quickly integrating with local legends such as God damn, Youth man and Table scraps, they’ve gone on to play with internationally touring groups The Chats, Swervedriver and Dune Rats, and held their own with UK rising acts Murder Capital and Shame. From Glasgow to London they have played across some of the nations underground DIY venues and have started to build a buzz nationwide and are regarded as one the most must see live acts in their region. "One of the most wild, unpredictable and exciting bands to step out of Birmingham... ...enthused crowd members clambering on stage to steal the mic and passionately yell along the lyrics. Meanwhile, the band tore the roof down with their brand of chaotic punk music, making as much noise as possible as quickly as possible. " Bad Girlfriend EP launch -

May 2018 "The dance floor is now packed out for three piece outfit Bad Girlfriend. Bassist Richie James and drummer Billy Smallman-Kopf perform seamlessly as they skip pleasantries and kick straight in, crafting the rhythms of great song after great song. Benson Chesterfield is a natural showman, and a spectacularly flamboyant guitarist." Easter Hott date all dayer - May 2019