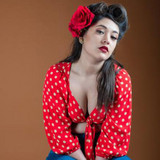 Their musical style is a tropical blend of Colombian-style cumbia and Cuban Son, featuring only live instrumentation and a small line-up, all of which lend to a unique sense of “throwback” to older traditions of Latin music. Though the music itself is an homage to the musical stylings of the past, La Mera’s message is as cutting-edge, contemporary, and timely as it gets. A few of their most notable releases include “Preséntame a tu hermana,” a sassy, danceable anthem for the spectrum of sexuality and womxn’s sexual empowerment; and “No te enojes,” a sensual, yet firm rejection of the hypocrisies of gender roles and power dynamics. La Mera Candelaria’s newest album,“Si Reina,” released in February of 2020, stays true to, and expands upon, the message of their previous releases. Ranging from a sassy critique of male entitlement; to a tender, queer-centric love ballad; to a bold declaration of the vibrancy of female sexuality, “Si reina" will play an important role in the critical movement for the decolonization/detoxification of Latin music, Latina womanhood, and queer Latinx voices. c/s