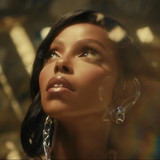 The fourth of ten children, Amaal began her remarkable journey in war-torn Mogadishu, where her family lived until they were forced to flee as refugees in the early 1990s. Starting in Toronto, she embraced the poetic nature of her culture but bristled at the conservative customs that came with it, particularly the repressive expectations placed upon women. As a teenager, Amaal had grown bold enough to begin making her own music, but she still felt limited as to what she could sing about, so she focused her creative energy on politically and socially conscious material inspired by her home country, and the struggles her people faced as a result. It was powerful stuff, to be sure, but there was more to Amaal than being a refugee, and she longed to express the fullness of herself and her story in her art. In 2019, Amaal finally worked up the courage to step outside of her comfort zone with the release of Black Dove, a daringly vulnerable collection that found her reckoning with love, heartbreak and desire in her music for the very first time. Though it felt incredibly risky, the EP was a critical smash, garnering a Juno nomination for Soul/R&B Recording of the Year, racking up millions of streams online, and prompting rave reviews across the board. Complex hailed Amaal’s “airy and ethereal vocals,” while Vibe proclaimed her a singer “like no other,” and Exclaim! dubbed her “an artist that demands attention.” Amaal’s sophomore EP, entitled Milly, will be released fall 2021.