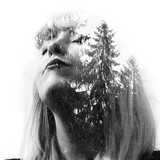 A truly organic breath of fresh air - Broken Forest is the inventive work of writer, singer and producer Luise London. Since she was a young child, Luise has had a great passion for nature and its connections to our lives and minds. These and other heartfelt messages are delicately translated into Broken Forest’s music, with sweet vocals hanging over a mesmerising blend of Atmospheric Folk and Organic Electronica. Luise took her music from Leipzig, Germany to London to begin crafting her songs on a professional level at the ICMP, followed by studying audio production at Westminster University, where she found her passion for bringing songs to live in her own unique way. Nature sounds are purposefully embedded into ambient synths, violin and guitar effects. The sometimes harsh and coldness of modern, urban life meets the sensibility and beauty of nature. The music is inspired by a variety of different genres from traditional UK and Irish Folk, to Pop and Trip- Hop, and artists such as Bon Iver, Grimes, City and Colour, or Keimzeit. Based in London,UK until earlier this year Broken Forest has had exciting festival appearances, like Boomtown Fair and Magical festival and joined Tour dates across the UK and Germany with No King No Crown, in 2019. Most recently Luise has moved to Leipzig, Germany to continue expanding her music career in her native country, beginning this new chapter with the upcoming release of ‘Stories Under the Pine Tree’.