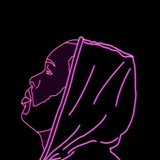 “ I remember having the demo version of Fruity Loops and I thought it was cool that you could make your own drum patterns and beats on the computer… I’d always get mad whenever they told me that I had to buy the full version… I never had money for it” It wasn’t until Levels moved to Chicago in 2009 that he started pursuing beat production. Some of his musical inspirations include producers such as: Timbaland, Pharrell Williams, Daft Punk, Metro Boomin, Three Six Mafia, Madlib, Kanye West and Manny Fresh Travis Scott and DJ Khaled. Level’s musical background includes being trained in guitar in addition to classical and Jazz Piano under the training of Grammy Nominated vocalist Jason Smith. In 2018, he relocated to the Des Moines area where he started his own music production group called Flight School Music Group. Currently, he enjoys the challenge of trying to break into the Iowa Hip Hop Scene as well as trying to network with local artists.