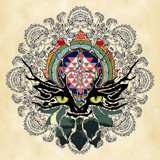 Imbued with a life-affirming sense of uplift and positivity, Oregon band Indubious fuse elements of reggae, dub, roots, and electronica into a style called rootstronica. Led by brothers Evton and Skip Burton, the group spent spent over a decade diligently touring and building a grassroots fan base with independent albums like 2013's Wake the Lion and 2019's Beleaf, the latter of which topped Billboard's Reggae chart. Both of the Burton brothers were born with Cystic Fibrosis, an incurable lung disease with a short life expectancy. Rather than succumb to their bleak prognosis, Evton and Skip turned to music and poured their energies into a positive creative pursuit that later became Indubious. Formed in Ashland, Oregon in 2008, Indubious released their debut album, Fresh Leaves, in that same year, introducing a core sound based around a tight rhythm section, nimble vocals, keyboards, and electronics. A follow-up, Cosmic Seed, appeared a year later as the band began to establish themselves among the West Coast reggae scene. Over the next four years, the Burtons continued to beat the odds and marshalled their spirits into broadening their audience with international tours and festival appearances leading up to the 2013 release of their third album, Wake the Lion, which was produced by Italian dub producer Gaudi. Arriving in 2017, the band's fourth album, From Zero, proved to be their breakout release. Featuring contributions from reggae and dancehall notables like Sizzla and Vaughn Benjamin (Midnite), From Zero marked the group's chart debut, reaching number six on the Billboard Reggae chart. Two years later, Indubious topped that achievement with their fifth album, the self-produced Beleaf, which debuted at number one on the same chart. ~ Timothy Monger, Rovi