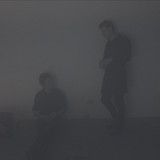 Every five years or so, a whirlwind named Madensuyu lands. With 'D is Done' (2008) and 'Stabat Mater', the duo built their reputation as a breathtaking and exciting band. Onstage, they become a two-men steamroll on an artistic path without compromise. On 'Current' (feb 2018 – Unday), Madensuyu keeps that same track: compelling and mesmerizing songs, built on minimalistic fundamentals, finished with copious amounts of noise when demanded for. Yet, like all of their former releases, a new record implies new musical elements and every album is driven by experiments.