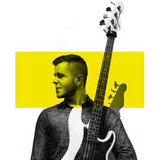 Bassist, producer, engineer... Christopher Bolte is a musician who has always been wearing several hats at once. He has reached critical acclaim in Europe playing with and producing ACT Music recording artist Natalia Mateo who received the 2016 ECHO JAZZ award as "Best Newcomer". He himself has also been called the "Best Bassist of 2014" by the German Rock & Pop Foundation.   While he was mainly performing with Jazz ensembles in the last couple of years, having graduated from college (which included a stint at the famous Berklee College of Music in Boston, MA), his focus began to shift heavily towards crafting his own personality as a non-conformist producer and musician. Now, he is defying boundaries of musical genres and fuzing his bass playing and production skills into a fresh, electro-acoustic mix. His debut solo album "The Push" marks the manifestation of this new artistic direction.   Chris was born in Bueckeburg, Germany in 1992 and has been making music ever since he was 4 years old. At 11 years of age, he first started getting into music production and has been recording music till this day. When graduating from high school, Chris already had well over 100 concerts under his belt and he proceeded to rack this number up once he got into music college where he studied Jazz bass. He is actively working as a session and touring musician, music producer, and audio engineer. Chris produces music under the moniker BØLT.