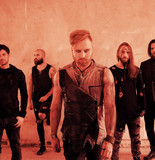 The six East-Westphalians of SOULBOUND look back on an almost 10-years career in alternative metal. But a recent wisp led them astray, deep into the shallows of urban, end-time industrial metal which is currently being captured on their first post-metamorphic album under the supervision and guidance of Chris Harms (Lord of the Lost). Deathstars, KMFDM, NIN or Marilyn Manson? They have all been around already somehow! Soulbound dare an english-language phoenix flight through Industrial and Gothmetal without renouncing their own roots in Nu-Metal and Alternative-Metal and keep their trademark in spite of all heavyness: catchy, melodic and socially critical verses.