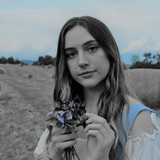 Liv Dawn is a singer-songwriter from Scotland who delicately blends elements of pop, country and folk within her music. Much like storytelling, Liv crafts compelling tales relating to everyday life and relationships in the hopes that it will resonate with her listeners and create a one-to-one connection.   Having performed in numerous acclaimed venues across Scotland, Liv’s prowess to hold an audience with her powerful vocals will always provide a captivating yet intimate show. After the release of her first single, ‘Reason’, Liv headed to London for the summer of 2019 and was spotted by McFly’s very own Tom Fletcher, complimenting her voice while busking.   Already making her mark on the Scottish music scene, Liv was selected as a finalist for the prestigious BBC Radio Scotland’s Singer/Songwriter of the Year Award 2019. Liv showcased her talent during the live final held at Saint Luke’s in Glasgow and gained praise from industry personalities including Horse McDonald, Geoff Ellis, Ricky Ross and Grant Stott.   Liv kicked off 2020 by supporting Tom Walker on his U.K Home Run Tour and was announced on the line-up of festivals including Glasgow’s Country to Country Festival. Liv released the song nominated for BBC Radio Scotland's Singer/Songwriter Award, ‘Welcome Home’, in December and now has exciting single releases planned for 2021.