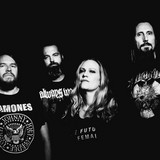 Cobra Cult from Stockholm, Sweden was formed late 2015 and brings you straight shooting hard rock. Being recognized as a great live act, the band have been spreading their music all around Sweden, Norway, Germany, England, and amongst other things, entered the stage at Sweden Rock Festival in 2019. Powerplay Magazine (UK) stated about the debut album "Cobra Cult" in 2018; "The eight songs fly by with a

mid-tempo intensity that is stirring ... just heads-down, uncomplicated, three-chord metal done right". The album was recorded and mixed by legend Tomas Skogsberg at Sunlight studio and mastered by Joel Grind of Toxic Holocaust. The new and second album, "Second Gear" was recorded and mixed by Robert Pehrsson at Studio Humbucker, and mastered by Joel Grind once again. Metal-Rules.com stated in their review of "Second Gear"; "Straightforward and soaked in contagious energy: “Second Gear” is this and much more. With their second album, Cobra Cult bring oxygen to the music scene, delivering good old hard rock that never disappoints and engages the listener from the very first track ... Cobra Cult is the type of band that I would like to see on stage soon, possibly in a sticky crowd, with a warm beer that I wouldn’t mind to spill because I am too busy enjoying the show".