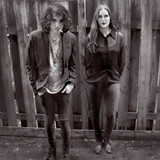 Discolor Blind is built upon the ideas and music of Ashkan Malayeri, with his role as a composer, guitarist, producer and lyricist. Ashkan began his battle in Tehran, Iran. After a short period in nearby countries, living in Ankara, Istanbul, Dubai, he subsequently found his way to Europe. He initially planned on moving to a Scandinavian country,

particularly for his interest in Scandinavian music especially that of musicians such as Alexi Laiho and Tuomas Holopainen whom he admired from a very early age, but due to linguistic reasons and convenience he chose England instead where he studied music theory, guitar and music production. He spent his first years in Cambridge and ultimately moved to London where he spent the majority of his time while in England. After having spent nearly half a decade in England and struggling with his residential status in the UK, in 2012 he was finally able to move to Canada where he founded his project studio, Mathilda Effenberg GmbH. In 2013 he began writing Long Vivid Dream which he finished producing in 2015. It was sung by Alexis Nadeau and released in 2016 but was only popular on YouTube due to lack of label support. Until now! In 2021 Ashkan founded Wolfgang Recordings GmbH.