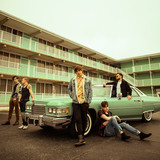 Merci implement seamless sonic synthesis. The Washington, D.C. quintet — Seth Coggeshall [vocals, guitar], Nick Jones [guitar], Colby Witko [vocals, keys], Justin Mason [bass], and Jack Dunigan [drums] — funnel dreamy nocturnal pop through the lens of dyed -in-the-wool rock underpinned by live instrumentation (Think Lana Del Rey reimagining Foo Fighters’ The Colour and the Shape, and you’re halfway there!). After grinding it out around The DMV in various groups since high school, they make their introduction on a series of singles and a forthcoming 2021 full-length debut for Rise Records. The core friendship between Seth and Colby dates back to Middle School when Seth moved from Seattle to Virginia and the two bonded over their love of music and songwriting in gym class. Meeting Jack, Nick, and Justin along the way, they played in various groups separately and together before finally joining forces as Merci in 2018. Their first single “Foolish Me” illuminates the nuances of this sound. Fusing guitar bliss, soft keys, and lush pop mystique, the track unfolds with a hypnotic elegance and hints at more to come.