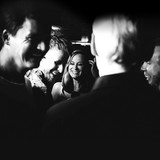 Scandinavian Music Group was formed in 2002 from the ashes of the massively popular Finnish band, Ultra Bra. The band's four original members -- Terhi Kokkonen (vocals), Joel Melasniemi (guitar), Tommi Saarikivi (bass) and Antti Lehtinen (drums) -- were all part of the extensive Ultra Bra lineup, but the music of SMG is more streamlined and less ironic than the agitprop pop of its predecessor. They've claimed such wide-ranging influences as Sonic Youth and Rage Against the Machine, but even the more aggressive songs in their catalogue have a distinct pop fluency owing more to the likes of Coldplay, Garbage or Manic Street Preachers. It's little surprise that the band has been so successful given not only the background of the members, but also due to the smart merger of the polished with the personal. Their first album, Onnelliset kohtaa ("Those with Happiness Meet"), was released by Sony BMG in 2002, and it quickly rose to the top of the charts. The follow-up, 2004's Nimikirjaimet ("Initials"), was a more personal record for the band, but it was received with lukewarm reviews and failed to reach the top ten. Between the two albums, bassist Saarikivi left the group and Anssi Växby was hired to take his place. To recoup their fans, SMG switched to acoustic instruments and reformatted their sound in the following couple of years. Actively performing across Finland, their concert attendance remained high. And even though the early singles from their third album, Hölmö rakkaus ylpeä sydän ("Foolish Love Proud Heart" 2006), failed to receive much airplay on the radio, the album charted at number six and received enthusiastic reviews. The music was much more subdued and gentle than it had been on previous releases, and it would be used as a springboard toward the subtle perfection of 2007's Missä olet Laila? ("Where Are You, Laila?"). Laila also topped out only at number six on the charts, but SMG received from it the best reviews of their career so far. The acoustic intimacy of the album had finally been matched well with the personal lyrics and distinctive vocals of Kokkonen. ~ JT Lindroos, Rovi