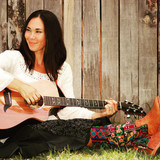 Stacey Joy is an award-winning songwriter and performer from the foothills of Northern California.

Described by NPR as “a much-needed breath of fresh air”, her musical style is a sultry mix of blues, jazz, folk and Americana. Since becoming a professional musician, Stacey Joy has lived ‘on the road’ full-time. Traveling (mostly) overland, she has performed in concert halls, clubs and at festivals in the United States, Canada, Mexico, Guatemala, Panama, Costa Rica, Ecuador, Colombia and Peru. Her debut album The Journey Unfolds won the award for Best Americana at the 2017 New Mexico Music Awards. It was also nominated for Best of the Year, Best Singer/Songwriter and Best Recording Engineer. The follow-up There’s Magic Here – described as the ‘perfect rainy-day record (Lokkal) – was a finalist for Best Adult Contemporary at the 2019 NMMA.