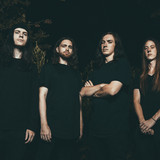 Shadow of Intent is an American metal band based in New England originally formed by Ben Duerr and Chris Wiseman in 2014. The band continues to release their music independently including their first album Primordial (2016), second album Reclaimer (2017) and very recently their latest work Melancholy (2019). The band name and lyrics were originally derived from lore from the Halo franchise and since then the band’s subject matter has become more dark and personal, while maintaining an element of fantasy and wonder. The band’s music is heavily built off of various different genres of metal including death metal, black metal, symphonic metal, progressive metal, and metalcore. The band played their first live show at the end of 2017, which then lead to them embarking on several US tours with bands such as The Black Dahlia Murder, Whitechapel, Carnifex, Fleshgod Apocalypse, Despised Icon, and more. The bands lineup today consists of Ben Duerr (Vocals), Chris Wiseman (Guitar, Vocals, Keyboards), Bryce Butler (Drums) and Andrew Monias (Bass).