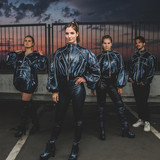 If it happens that three girls grow up together in the same house it is not a surprise that every sound of their Indie-Folk-Pop is a resonating pure harmony and blind understanding. Characterized by their extraordinary creation of handmade guitar music combined with a beautiful and soft polyphony up to unexpected powerful alternative rock songs, they have gained more fame within the Berlin music scene throughout the years. Additionally, they do not only surprise with their multifarious songs but also stand out for their handmade stage outfits. Adventurous but not aimless, confident but grounded, sugar-sweet but not boring is just one small attempt to describe the unique mix out of catchy and also refreshingly unexpected ideas of Lane of Lion. In the beginning of 2010 the sisters Alicia and Luca Ephan set off with their cousin Lara Wojtkowiak while trying out new instruments in the rehearsal room of their parents. Meeting Joel Rosenblatt, a studied musician from Uruguay, made the band complete. In the summer of 2016, the band celebrated the release of their debut album Topsy-Turvy, which was produced at H.O.M.E Studious Hamburg in collaboration with Franz Plasa. What followed were music videos that have been carried out by themselves and the clip for the title song of the album got nominated for the LISTEN TO BERLIN Award. Their 2nd studio album Shiver & Shake was released by the end of december 2018.