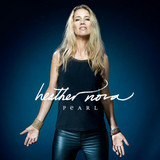 Balancing mainstream adult pop, grittier rock, and the poetic influence of childhood idols Patti Smith and Kate Bush, Bermuda native Heather Nova charted in the U.K. and the U.S. with her first worldwide release, 1994's Oyster. She soon became a regular in the Top 30 in parts of continental Europe, with albums like 2003's Storm and 2011's 300 Days at Sea. Her ninth international studio album, The Way It Feels, leaned toward Americana, and the more rock-minded Pearl from 2019 invited comparisons to Oyster, then celebrating its 25th anniversary. Born in Bermuda in 1967 to a Canadian mother and Bermudian father, Heather Frith spent most of the first 16 years of her life aboard a 40-foot boat with her parents, brother, and sister, and relied on singing and music as means of entertainment. She listened incessantly to taped records from her mother and began crafting her own songs by age eight. By 14, she was learning to play guitar. Two years later, she and her family settled in the States, where Nova enrolled at the Rhode Island School of Performing Arts, first to study visual arts, later shifting into writing music for films. She eventually moved to New York City to pursue music and adopted her mother's maiden name. Her time in New York was short-lived; Nova found herself at home in London by the late '80s with a renewed focus on songwriting. She recorded a self-titled EP under her given name that was later released by Rough Trade as These Walls (1990). In the midst of years of coffeehouse gigs across the U.K., her first album, Glow Stars, arrived in 1993, with the live effort Blow following later the same year. The president of Big Cat Records, Abbo, was taken by her music's lyricism and made her an offer. Nova worked with Killing Joke's Youth for her proper global debut, 1994's Oyster. Oyster, which appeared on Sony/Work in the States, reached number 179 on the Billboard 200 and number 72 in the U.K., leading to nearly 300 gigs across Europe over the next two years. Nova then returned to Bermuda for some downtime. It was there that she reflected upon her life and composed songs for a more serene third album. The resulting Siren saw release in 1998, again charting in the U.S. and U.K. Though still residing in London, Nova recorded her next album while on vacation in Bermuda. Titled South, it was issued by V2 Records in 2001. That same year, she appeared on soundtracks for the romantic comedy Serendipity and the Sean Penn vehicle I Am Sam. For the latter, Nova covered a Beatles song alongside the likes of Eddie Vedder, Sarah McLachlan, and Paul Westerberg. South eventually reached the Top Five in Germany and received a U.S. release in 2002. The year 2002 also brought a self-published book of drawings and poems titled The Sorrowjoy. The full-length Storm arrived in 2003 featuring Mercury Rev as her co-producers and backing band (credited as the Divine Sparks). Released by Big Cat, it didn't get U.S. distribution but did reach the Top 20 in Germany, Belgium, Switzerland, Austria, and Sweden. Nova's sixth album, the Felix Tod-produced Redbird, followed in 2005 and peaked at number ten on Germany's album chart. The acoustic and earth-friendly The Jasmine Flower (recorded on a solar-powered laptop) appeared in 2008, and the upbeat, nautical-themed 300 Days at Sea surfaced in 2011, landing on the album charts in several European countries, including Germany's Top 25. Nova's eighth studio album, the Americana-infused The Way It Feels, was recorded in Charleston, South Carolina and released in the summer of 2015. It fared well in Belgium and the Netherlands, hitting the Top 40 in both countries. Arriving 25 years after Oyster, 2019's Pearl returned to more rock-minded arrangements under the guidance of Oyster co-producer Youth. ~ MacKenzie Wilson & Marcy Donelson, Rovi