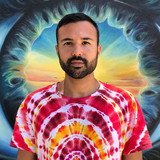 @bryandivisions Bryan Divisions is a multi-dimensional artist, rapper, and producer creating music who explores self-realization, spirituality, personal growth, love, and equality. In his formative years, Bryan turned to writing to express his deeply held feelings and questions about the divisive aspects of human nature. Decades later, in 2015, the creative forces within manifested into his first self produced album, Shivai. Bryan's discography is an honest portrayal of an individual on the path of self-realization and self discovery. By consciously integrating both negative and positive earthly experiences into his creative sound, Bryan's music serves as a confrontation to the unconscious aspect of our society that is out of touch with nature, invoking awareness to the one great truth: that we must each seek individual alignment for a better planet. While delivering optimistic and hopeful lyrics amidst stories of struggle, Bryan's soundscapes help us delve into our subconscious and reconnect with our inner selves. His lyrics are a reminder that we are the creators of our realities, and that a new balanced world is possible when we first balance our own internal energies as individuals. New album 'Visualize' out now