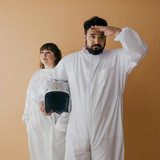 A year after the release of their debut album “Fingers Crossed”, this Parisian pop-folk duo’s career has found new momentum after Citroën chose single “Here We Are” as the soundtrack to their 2016 global advertising campaign for the latest C3. After charting in France, Belgium, Norway, Iceland, Lebanon, Germany, Japan, Korea and the UK, “Here We Are” made its way onto Italian and French airwaves, spending over 52 weeks in radio playlists across France. They quickly began writing the second album, that saw them collaborate with Rune Westberg. “Streets and Stories” was born from this collaboration as the 1st single off their sophomore album, backed by a music video fully produced, directed and imagined for Instagram’s Story function – the first of its kind - garnering support from the social network itself as well as from French icons such as Marion Cotillard. The band just finished recording their second album in Wales with Tom Manning (PJ Harvey) and Ben Christopher (Bat for Lashes), which was release on March 2018. "Streets and stories " has now bagged 15 millions streams and been used in numerous synchs across the globe, and most notably the Citroen C3 global campaign. In July 2019, Part-Time Friends came back with "FIRE", a new EP that quickly gained traction in radios, streaming and synchs as well - the track has been featured in "Childs' Play" or "Shameless" to name a few. Part-Time Friends have completed their 3rd album in January 2020, announced for 09/20.