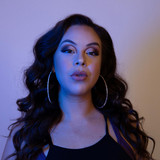 Kaila Love is a rapper from the Bay Area, CA. She started rapping at 14, to impress a boy in high school but realized she was way better than him. She never stopped rapping despite trials and tribulations she would face from becoming homeless to abusive relationships. She always believed in herself though and went on to become the first in her family to go to college when she earned a B.A. in Political Science from UC Berkeley. The best part? She performed at her own graduation ceremony for a crowd of 30,000.