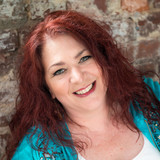 Nancy Moran is a folk-style singer, songwriter, and guitarist who was born in Pittsburgh, PA, and raised in historical Richmond, VA. She was already grown when the music bug first bit. With powerful vocals, a style all her own, and a successful mix of folk and country, she seems to be making her way in the music world and enjoying every minute of it. In 1987, Moran became the lead singer for a group called Driftwood. A year later, the band spilt up, and since she was on her own anyhow, Moran jumped head on into a solo career. In 1991, determined to sink or swim, she left the security of her day job behind to devote all of her attention to her music. That same year she recorded a debut album, A Little Off Balance, working under the Azalea Records label. The album captured mostly positive reviews. In 1992, appearing at festivals, clubs, and coffeehouses, Moran placed in a number of contests, and was even nominated for two Wammie awards. A year later, she moved to Nashville, TN, and finished a sophomore album, Objects in Mirror Are Closer Than They Appear. Her next full-length release was My Gallery. Moran's lyrics can go from tearjerker sad to belly-shaking funny from one tune to the next and almost always are filled with heart-felt emotion. Some of the tracks fans can find on her albums are "In My Kitchen," "Classified," "A Dozen Brides," "Putting Other People Down," and "Song for Lebanon." ~ Charlotte Dillon