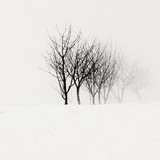 Official store: shoresofnull.bandcamp.com Website: www.shoresofnull.com Shores Of Null is a Rome-based metal band, an unwavering presence within the metal underground since their musical outset in 2013. They have churned out two impressive records: “Quiescence” (Candlelight, 2014) and “Black Drapes For Tomorrow” (Candlelight/Spinefarm, 2017), both of which were highly praised by the worldwide music press. Shores of Null stands out from its contemporaries with its ability to blend seemingly disparate elements and their ability to sound overwhelmingly heavy and soothing at the same time. Blackened aggression stands alongside gothic-doom sections without either sounding out of place. Their music can be both melancholic yet majestic, made of chorale-like guitar textures across the instrument’s entire range, sustained by a powerful rhythmic section and punctuated by a refined mixture of clean and growled vocals, along with extensive use of vocal harmonies which have become the band’s trademark through the years. Shores Of Null’s third work, “Beyond The Shores (On Death And Dying),” released in November 2020 via Spikerot Records, is a 38 minute-long suite emphasizing their heavier, slower and dramatic side. The band has collaborated on the dark opus with many special guests, including Mikko Kotamäki (Swallow The Sun), Thomas A.G. Jensen (Saturnus) and Elisabetta Marchetti (Inno).