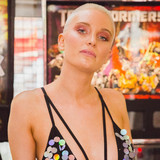 Emerging from deep within the fertile world of Melbourne musicians, NUSSY has continued to sing her way from dark back alley performances to shimmering festival electronica with a voice that both romances the ears and saddens the heart. In 2017, she was diagnosed with a benign cyst in one of her vocal folds. After the surgery, NUSSY was unable to speak or sing for several months, putting her music career on hold. A showcase of her signature vocal and an electronic production that effortlessly portrays the underlying spiritual tones of its lyrics, ‘Sahara’, is NUSSY’s latest offering. Written about the basic principles of Karma, treating others how we wish to be treated and the journey on which we can take ourselves with spiritual growth, NUSSY tells, “Sahara is about searching for meaning in our journey through life and finding purpose. There’s a sense of spirituality and introspectiveness about it.” NUSSY has been commanding attention one electrifying live show at a time. As well as a wealth of hometown shows, she is no stranger to the international scene, having previously performed at Music Matters (Singapore), Canadian Music Week (Canada) and Live At Heart (Sweden). Not only a gifted vocalist and songwriter, NUSSY has been commissioned to DJ for Melbourne Music Week and Melbourne Spring Fashion Week. In the highly saturated world of electronica, she stands out from the rest as a true artist with a story to tell.