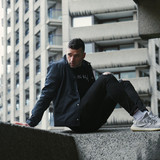 British musician Farius is at the top of his game - with releases on renowned labels such as Enhanced, Armada, Anjunabeats, live shows with brands like Ministry of Sound, A State Of Trance and more, as well as hosting Enhanced Sessions, a weekly radio show broadcast in over 20 countries around the world with over 550k global listeners on 60+ stations, all whilst heading up A&R at Enhanced Music - it’s no wonder Farius has begun to cement himself as one of the leading figures in the world of progressive & trance. His effortless blend of melody with his signature euphoric sound design has seen his music regularly supported by some of the world’s biggest DJs - from Armin van Burren to Above & Beyond, right through to David Guetta and the late Avicii. In 2017 the London based DJ/Producer achieved his first Beatport success after breaking the Top 10 Trance Chart with his trailblazing single ‘Echo Chamber’, sparking the beginning of a special string of chart-topping Trance success and soon followed features such as Mixmag’s ‘Tune Of The Month’ later that year. Pre-pandemic in 2019 his versatile and energetic live shows took him around the world, playing across the US in cities such as New York, Phoenix, Miami and more, and closer to home at festivals such as Untold in Romania. In 2021 he will kick off his live shows once again starting with a performance at Armin van Buuren’s iconic A State Of Trance festival in The Netherlands.