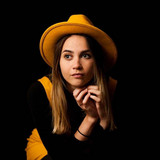 Singer/songwriter Molly Armstrong grew up in the leafy suburb of Cambridgeshire. She started her singing career by playing the main role in a year 4 performance of Puss in Boots. After this, she started having singing lessons and her journey began. Molly and friend Charlie started playing round the local pub and club circuit around their home county. They were then spotted by a local fundraiser who asked them to produce a charity album for the local hospice. This was a success as the album raised over £6000. Sadly, Molly didn't realise how much the hospice would come to mean to her family, as her mother Elaine died there in 2015. Elaine's death meant that Molly needed an outlet to help her cope, and music gave her that. She was able to write songs with the help of others, to express how she was feeling and being able to perform on the stage was almost like therapy to her. Molly has since gone on to release a single in 2019 called ‘Coming from the Other Side’ and during the 2020 lockdown her debut EP ‘Always Remain’ was released. One of the tracks on the EP called ‘Breathe’ was picked up by BBC introducing in Cambridgeshire and she also has started her own youtube channel, playing a mix of original songs and covers that kept her busy during those lockdown months. She is currently working on new material and hopes to release more music soon so watch this space!