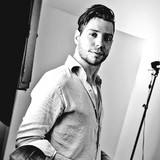 Studied guitar with the Maestro Marco Montanari, today it is my main instrument. In adolescence I played with several groups, After this period he starts to study electronics and computer science, and becomes fascinated by electronic music, despite coming from a listening of progressive rock. From 2015 to 2019 Francesco Malaguti produces hundreds of tracks, many of which are unpublished and unreleased, forming part of long concept albums that range between pop, electronic, art music, soundtracks, ambient music, industrial, rock, techno or IDM, without setting himself any stakes or constraints. In particular, with an experimental eye, above all, on the musical structure and de-structuring of commercial publishing. In 2015 he releases his first DIY album, "Parti", a long experimental concept that will open the door to a series of albums that will fall, precisely, in his personal project that takes the same name, Parti, in each subsequent release. Electronic - Songwriting - Atmospheric / Contemporary / Ambient My inspirator or "mentors" can founded in "Mike Oldfield" ("Amarok", Krautrock "Talk Talk", RPI "Premiata Forneria Marconi or