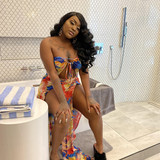 Bold and outspoken Chicago rapper CupcakKe achieved viral success and critical acclaim with her brazen, unapologetically explicit songs and videos that channeled the likes of Lil Kim, Foxy Brown, and Gangsta Boo. Her work explores sexuality in graphic detail, and while many of her songs are humorous and playful, she has more serious, introspective material that deals with sexual abuse ("Pedophile"), racial issues ("Picking Cotton"), and LGBTQ empowerment ("Crayons"). She debuted in 2016 with a pair of raunchy EPs and a full-length, Audacious, following with the critically acclaimed Queen Elizabitch (2017) and Ephorize (2018). Elizabeth Eden Harris was born in Chicago in 1997. At the age of 14, she began writing religious-themed poetry, performing in local churches. She started turning her poems into raps and uploading them to YouTube, receiving thousands of views. In late 2015, inspired by Khia's hit "My Neck, My Back," she decided to write sexually explicit material. The videos "Vagina" and "Deepthroat" appeared and quickly spread on the Internet like wildfire. Both songs appeared on her debut mixtape, Cum Cake, in February 2016. S.T.D (Shelters to Deltas), named for Harris' years spent in homeless shelters, followed in June, and the studio album Audacious arrived in October. The releases received praise from Pitchfork, Rolling Stone, MTV News, and numerous hip-hop websites. Harris guested on Charli XCX's song "Lipgloss," which appeared on her March 2017 mixtape, Number 1 Angel. CupcakKe's second studio album, Queen Elizabitch, appeared soon after, and the rapper toured North America twice during the year, in addition to releasing two subsequent singles, "Exit" and "Cartoons." Both songs appeared on her third studio album, Ephorize, which dropped near the beginning of 2018. The set peaked at number two on the Heatseekers chart, while landing in the Top 20 of the Billboard Independent Albums chart. Months later, she issued her fourth full-length, Eden, featuring the singles "Quiz" and "Blackjack." CupcakKe closed her decade with a flood of singles in 2019, including the size-obsessed viral hit, "Squidward Nose." The following year, she reached a career high with the single "Discounts," which topped streaming charts and rose into the Top Ten of the Billboard Digital Songs chart. ~ Paul Simpson, Rovi