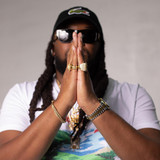 OG-2G, 2g, Dub, and affectionately recognized by family and close ones in his circle as Carey Woods is a substantial contender in the arena of emceeing - both in physical stature as well as in regards to time spent in the game, as his official moniker would suggest. Moving like water, adapting and adopting new styles as the timeline of HipHop progresses, there have been many stages of evolution that yield the multi-faceted artistry you hear and see coming from this flipper of flows today. Such evolution is evident with a record like 'Gotta Eat', the unearthly sound-scape and unorthodox percussion patterns are wrangled effortlessly and concisely by the veteran emcee with a single verse,

transforming the fast moving, at the same time lethargic, track into a sonic masterpiece. Subsequent audio additions like 'Blue Faces', and 'Price On Me', present similar evidence of a practitioner of rhythm and poetry fine tuning his craft to the optimum level. Incorporating his comrades in music and artists under the Big 2G Entertainment brand. Including artist such as Rockamo, C-Will and D-Loc, OG2G has expanded his writing talents on to the movie set with ‘Hood of the Dead’, a story written by the rapper/director that has a plot unfolding in the streets of Dallas Texas.