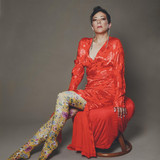 Gretchen returns after a six-year focus on motherhood with Flor: a project celebrating her love and admiration for Brazilian music. Flor weaves new sonic textures of guitar, cello, and percussion/drums, exquisitely complementing the intensity and delicacies of Gretchen’s signature voice. Since the early 2000’s Gretchen Parlato has justly earned her reputation as one of the most inventive and mesmeric vocalists of her generation. Featured on over 85 albums, four as a leader, Gretchen received a Grammy Award nomination for Best Jazz Vocal Album for Live in NYC (2013) and a coveted 4.5 star review from Downbeat Magazine with the DVD hitting No. 1 on the iTunes best music video list. The Lost and Found (2011) received more than 30 national and international awards, including the Downbeat Jazz Critics Poll No.1 Vocal Album of 2011 and iTunes Vocal Jazz Album of the Year. Her 2009 sophomore release, In a Dream, was Jazz Times Critics Poll Vocal Album of 2009 and hailed by Billboard as “the most alluring jazz vocal album of 2009.” “Flor is the nostalgia of something familiar and the breath of something new. It’s detail, it’s listening; it’s rooted, yet growing and giving. It’s both simple and mysterious.” Gretchen continues, “My art has always reflected my life. These days, I’m finding the balance between artistic creativity and nurturing motherhood. My purpose now has both a higher and deeper meaning, and this project is a musical representation of that journey.”