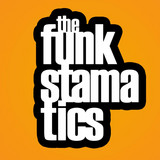 After their first demo was picked up by trend setting funk DJ’s including Maestro, the group started to build a solid live reputation with shows ‘dripping with excitement and fun’. They opened the Saint Paul Soul Jazz Festival in France, played aftershows for the Commodores and Kool &amp; The Gang and jammed with Bootsy's Rubber band. Their debut vinyl single Brooklyn Groove was released by the Hammondbeat Records. Since, the band has released numerous singles, featured on compilations and released 3 albums, all presented at Amsterdam's legendary Paradiso. BBC legend Craig Charles handpicked the single Koekwaus for one of his legendary compilation albums. In 2015 the band changed its name (for reasons both legal and funky) from Euro Cinema to The Funkstamatics. On Lift Off, the first album under the new name, the band sounds rawer and more live than ever.