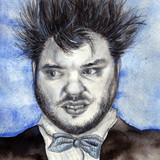 Anyone who has already been able to experience a performance by Icelandic troubadour Svavar Knútur will remember it for a long time. His performances are an emotional rollercoaster ride between tear-weeping and laughing. He takes you into his spell and won´t let you go so quickly. Svavar Knútur’s performances have been widely praised, in both the Icelandic and the international press. The German edition of Rolling Stone noted his exceptional storytelling, charismatic stage presence and his “soft cotton, Nordic folk reverie”. Brisbane’s Rave magazine also described him as having “swoon-worthy vocals” complimenting the “beautiful simplicity and raw emotion of his songs”. Influenced by such songwriters as Nick Drake, Kris Kristofferson and Bonnie “Prince” Billy, Svavar has developed his own style. Svavar’s live performances are usually a mixture of song and story. On stage, he presents spellbinding and magnetic shows - beckoning the audience along with him on a journey through misery and redemption. However, Knútur always ensures his fans have comedic stops along the way. All the while, he maintains his creative goal of emotional healing and catharsis. “There is always a subtle sense of humor and hope in my lyrics.” His audiences are often laughing and crying - simultaneously. In recent years, he has extensively toured Australia, the US, Canada, UK and Europe, playing over one-hundred live concerts per year.