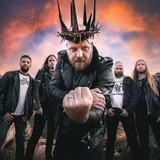 From their inauspicious origins within a very crowded extreme music scene, Sweden's Crown slowly rose to the very top of the Scandinavian death metal class. Interestingly, throughout this gradual but inexorable climb, the members of the Crown didn't distinguish themselves for bringing innovations to the genre so much as for their unapologetic commitment to pure, unadulterated, lightning-fast, ear-shredding, Satan-worshiping death metal. "Crown of Thorns," as they were originally named, formed in the city of Trollhattan, Sweden, circa 1990. Slowly developing their craft over the next few years, singer Johan Lindstrand, guitarists Marko Tervonen and Robert Österberg, bassist Magnus Olsfelt, and drummer Janne Saarenpää eventually recorded a demo in 1993 with the mission statement-like title of Forever Heaven Gone. Guitarist Marcus Sunesson replaced Österberg prior to demo number two, the much more accomplished Forget the Light, which landed them a deal with Swedish indie Black Sun Records prior to 1995's The Burning full-length debut. A furious, melody averse collection of evil death metal annihilation, the album mixed new numbers with re-recorded demo oldies and, frankly, made for a very challenging listen. But it still garnered enough positive press to score the group a slot on a Slayer tribute album called Slaytanic Slaughter, and extensive touring led to quick creative ripening by the time of 1997's Eternal Death -- after which a Christian rock band also calling themselves Crown of Thorns forced a shortening of their name to simply the Crown. Un-phased, the band simply vowed to play ever faster, meaner, louder -- making sure that their third effort (and first for renowned Metal Blade Records), 1999's Hell Is Here, was their fiercest yet. More touring throughout Europe with the likes of Emperor and Morbid Angel ensued, culminating in a triumphant set at the Wacken Open Air Festival. Encouraged by their growing fan base, the Crown rushed back into the studio to record 2000's Deathrace King, another blistering speed metal tour de force that boasted guest vocals from Impaled Nazarene's Mika Luttinen and former At the Gates legend Tomas Lindberg. However, after completing their biggest tour yet (including a first-time visit to America), founding vocalist Lindstrand suddenly left the band. This turned out to be a blessing in disguise, as the Crown were then able to recruit the aforementioned Lindberg to replace him, and his impressive track record and incomparable vocal Armageddon not only helped accelerate the band's evolutionary process, but ensured that 2002's Crowned in Terror would catapult the band into the extreme metal stratosphere. Indeed, it seemed that the Crown hadn't missed a single (blast) beat. Crowned in Terror outsold (and often out-paced) all that had come before it, and showed the band reveling in manic velocity, while still somehow making room for ever improving songwriting and a more pronounced sense of dynamics. But unfortunately, the notoriously unreliable Lindberg soon left them in a lurch, making his exit at the end of 2002 and forcing an uncomfortable reconciliation with original screamer Johan Lindstrand. Thankfully, he readily accepted the invitation to come back, but with the release of 2003's follow-up Possessed 13, it became apparent to most fans that a large portion of the Crown's previous energy and conviction had departed with Lindberg. The band's sixth LP still sounded competent, but also tired, and seemed to many like an uninspired step backwards. This notion was soon confirmed when the Crown announced they were breaking up, having lost heart in their mission. The group reconvened in 2009 and inked a deal with Century Media Records. They released their eighth studio long-player, Doomsday King, via the label the following year. 2015 saw the band celebrate their 25th anniversary with the release of the full-length Death Is Not Dead, and in 2017 they made the move back to Metal Blade and released the single "Iron Crown" in anticipation of the release of Cobra Speed Venom, which arrived in early 2018. ~ Eduardo Rivadavia, Rovi