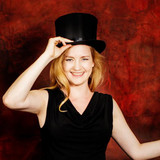 "Luisa Imorde enchants the audience" a critic writes about the young German pianist, since her piano playing "is by no means routine, but love, to which she devotes herself musically". Raised in a family of musicians, Luisa Imorde received her first piano lessons at the age of

three from her mother. After first being taught as a young student by Prof. Andreas Frölich, she continued her studies with Prof. Jacques Rouvier at the Mozarteum Salzburg. Besides several national awards such as the “Klassikpreis” of WDR, Luisa Imorde is laureate of various international piano competitions. In 2015 she made her recital debut in the Konzerthaus Berlin and played the austrian premiere of two piano concertos by Eliott Carter at the Mozartwoche Salzburg. Great attention was paid to her first album "Zirkustänze" (2016), featuring works by Robert Schumann and Jörg Widmann with whom she has worked on various occasions. Since 2012 Luisa Imorde is a scholar of the Studienstiftung des Deutschen Volkes. She is also fostered by the Theodor Rogler-Stiftung, “Yehudi Menuhin – Live Music Now e.V.” and the Villa Musica Rheinland-Pfalz. Since 2018 the pianist is part of the Berlin Classics family and will release her new album "L'Affaire d'Honneur" in February 2019.