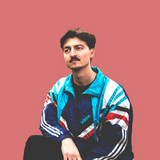 Aske Stampe is though an upcoming musician one of Denmark's top fingerstyle guitarists. Aske's musical development has been fast and furious starting to play the guitar at age 16 until his current 27 years of age. Encouraged by audiences attending his concerts in both Denmark and Melbourne, Australia he is just getting started with proper recordings. Besides arranging his own original instrumental compositions he also composes music accompanying widely renowned video projects including promotion videos for Visit Samsoe. His musical profile is very much rooted in fingerstyle guitar with inspiration from the likes of Tommy Emmanuel but is also hugely inspired by contemporary disco and jazz as heard from for example Tom Misch and Jacob Collier. In June 2020 Aske released his first EP "Guitar Tape 1" following his 2019 single release "French Summer". The title Guitar Tape 1 and the EP-format both implies that it is a small collection of different original tunes whose origin are spread out over a long period of time. The recording of the EP was made at his small home-studio with 1 mic. Mixing was done at a local studio with much appreciated help from Frederik Langkilde.